Parisian Etagere with Bird Detail was inspired by the work of Diego Giacometti (1902-1985). Diego was a Swiss sculptor and designer, and the younger brother of sculptor Alberto Giacometti. After business studies in Basel and Saint-Gall he followed the advice of his mother Annetta and went to Paris to join his brother Alberto, then a student of the sculptor Antoine Bourdelle at the Academy of the Grande Chaumière. The working relationship of Diego with Alberto was so close that it is sometimes difficult to distinguish the work of Diego from that of Alberto. The metal surface of this etagere is beautifully textured as though it was fashioned by a sculptor. Such surface texture was widely used by Diego Giacometti on his furniture and lighting creations. He often used to adorn his pieces with little animal sculptures. The bird accent on this etagere is a tribute to Diego. With its European style timeless elegance, this unique piece will always be a source of visual gratification. The etagere may be used for displaying objets d’art or fine books. Its robust metal construction allows it to support five thick glass shelves without flexing. Four polished bronze glides are provided which also serve as levelers – a useful feature when the floor is uneven. It is offered in a variety of finishes. Custom sizing is available. The Parisian Etagere with Bird Detail was designed by Shah Gilani, ISFD. 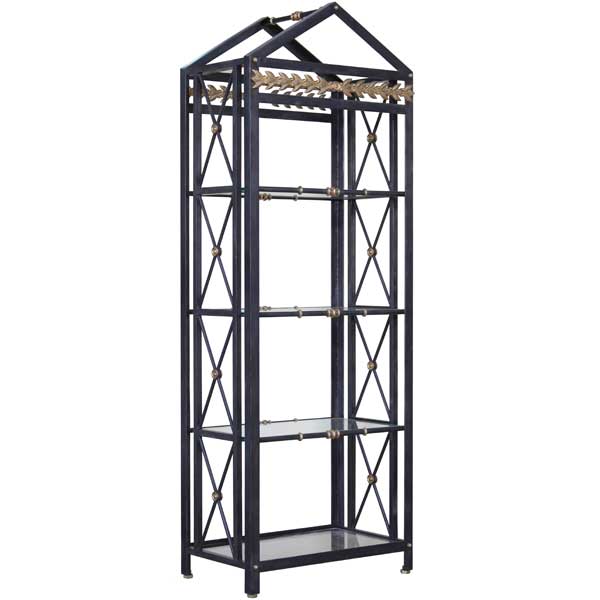