Note 1: To be used with a flower pot and pan (not included)
Note 2: Not for outdoor use

The design of the Etruscan Planter was inspired by furnishings of ancient Rome. Etruscan is the modern name given to a civilization of ancient Italy. Its homeland was in the area of central Italy, just north of Rome, which is now called Tuscany. Culture that may be positively identified as Etruscan developed in Italy after about 800 BC. Around 500 BC the political destiny of Italy passed out of Etruscan hands, but the decline was gradual. The last of the Etruscan cities were formally absorbed by Rome around 100 BC. Ancient Roman architecture began with Etruscan styles which later gave way to Greek influence. The Etruscan Planter was designed by Shah Gilani, ISFD. Constructed of metal with polished bronze accents, the planter is available in multiple sizes. The four side panels are heavy 18 gauge brass or copper sheet which has been lightly patinated and antiqued for a mellow aged appearance. This unique planter is designed for indoor use in upscale residential and hospitality interiors. It is recommended that this planter be used with a pot and a pan to catch drippings. The metal frame of the planter is offered in a variety of finishes. Custom sizing is available. 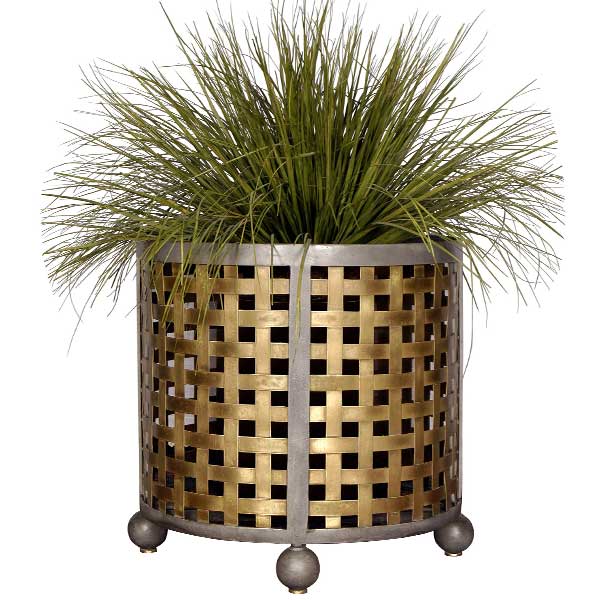 Material: Metal, available in a variety of finishes Lattice: Brass - distressed and antiqued Glides/Levelers: Polished Bronze Custom sizing available. Designed by Shah Gilani, ISFD Note 1: Must be used with a flower pot and pan (not included) Note 2: Not for outdoor use Print Tear Sheet
Select options